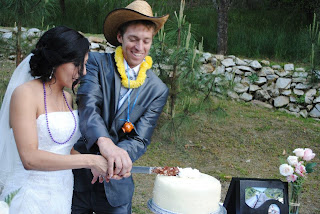 Sometimes the best way for me to realize how much I love Durango is to leave it. I’m writing these words, right up to deadline, from the lovely Denver International Airport (DIA) after a cozy night of sleep on the floor, surrounded by flustered travelers, socked in by a late spring snowstorm.

These are far from ideal writing conditions, I typically prefer a quiet room with a hot cup of tea to compose my prose, but alas deadlines are deadlines, and at least I’ve got an adventure to reflect upon.

My last four days were spent near Monterrey, Mexico, attending the wedding two dear friends, and sampling some of the finest climbing I’ve ever seen in my fifteen years of searching God’s green earth for vertical adventures.

I worked hard and saved my pennies all winter long for this one. I renewed my passport, which blew my mind to recall that it has been ten years since my first international travelling experience that changed my life when I helped build a small concrete house in Nicaragua for a family in need. On that trip I learned when one gives a gift he also receives something in return. Also, I learned that roosters don’t simply crow in the morning.

I’ve always had good luck with plane travel and that ended with this adventure. With more delays and missed flights than I care to write about my first night I found myself sleeping on the floor of the Houston airport, devising an archaic sleeping arrangement involving a backpack, a climbing rope, and a light sleeping bag. At six in the morning I was hungry and trying to resist the sweet smell of coffee, a habit I’ve recently given up. I ate some food and listened to a good ol’ boy Texan complain to strangers about not being able to bring ammunition on the plane. Only in Texas.

Eventually I flew into Monterrey in the morning, greeted by my friends at the airport, ninety-degree temperatures and a woozy state of mind. We drove to the town of Hidalgo, where my friend Mark spends his winter climbing and guiding, and had a few lazy hours soaking in the heat at his casa.

Hidalgo is small town Mexico, straight out of the movies. Everyone moves slow, and it feels like walking back in time. People smile and wave. The main form of industry is a cement factory and the two thousand foot limestone walls of El Potrero Chico loom in the distance. Our first move is food, always food, we spend a modest amount of pesos on lunch, 40 tamales for the three of us, and then like climbers do, make our way to the cliffs.

It’s a short drive on a slightly bumpy dusty road. Mining is evident on the cliffs just before the park. We talk about the mass murder that happened just months before. Seventeen people from the band, Kombo Kolumbia were taken from a bar in Hidalgo and were beheaded, their bodies dumped in a nearby water well. As we drive into the canyon Mark points out the bar, one he was warned awhile back to never go to. 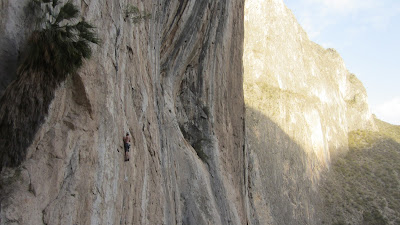 We are the only climbers in this limestone paradise, and it feels like having our own Yosemite, all to ourselves. Trash and graffiti litter the canyon floor, as my mind adjusts to how nature is treated in Mexico. I feel dead to the world and struggle up the hike, as limestone swirls above me. Two slender towers to the left, and an eight hundred foot wall of orange and white stripes to the right, which we set up under and prepare to climb. The first climb is awkward and I feel like an instrument that is out of tune. Something amazing happens after our warmup, I am inspired to try a route at my limit, and I come alive. I am the climb, one hundred percent in the moment, and my body and mind are tuned. More friends from The States arrive and the fiesta begins.

After some more climbing the next day it was time to prepare for the wedding. We drive back into Monterrey. Forget murder, climbing, poisonous snakes and spiders, driving in Mexico feels like the most dangerous part. Stop signs are ignored, and the shoulder is always being used to drive on; it feels like a collective insanity.

The wedding is up in the hills, where the temperatures are cooler, there’s less trash, and it generally feels like paradise. Mark and his bride Norma are married in a small, quaint Catholic Church. Mark is one of the biggest dirtbags I know and to see him move into this lifestyle is serene. Tears are cried, happiness is abundant and soon it is time to party.

This was not a destination wedding, everything was authentic. The band rocks the house for five hours and all sorts of rituals are performed. I dance hand in hand with strangers, take shots of tequila, drink pina coladas, and generally get wild. Mark and Norma are decorated from head to toe in colorful costume. Hats, balloons and kazoos are handed out to the crowd. Later the band organizes a kissing contest between the bride and groom.

The next day climbing again on our minds. Mark takes us to a newly discovered cave. It is the coolest climbing area I’ve ever seen. Stalactites and tufas dangle from the overhanging limestone wall, some twenty feet long as if held on by some mystic prayer. Hung over, but psyched as could be we climb until dusk. It is my last day and I wish for more time. 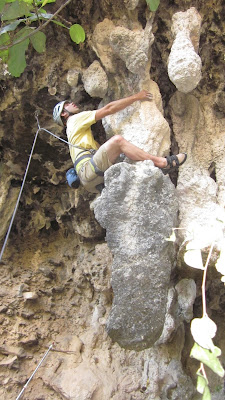 The journey home goes well until the snowstorm hits Denver. We get on the plane, only to sit there for two hours and have to de-plane. I’m dreaming of being in the arms of my ladyfriend, but alas I’m destined for another night on the floor of an airport. I try to keep my cool and manage to do so, after all, life is but a dream, and now my greatest dream is to be back in Durango.
Posted by Luke Mehall at 9:30 AM No comments:

Seven hours into a layover in the Denver International Airport with an unplanned bivy ahead of me (that's climber speak for sleeping somewhere unexpected) these are some things I've seen and noticed. I'm stoked to arrive at my destination of Monterrey, Mexico for my dear friends Mark and Norma's wedding.

An old woman tells me her story
An unexpected landing in another place other than my destination
Finally, we arrive in Denver, my plane long gone
Tickets rebooked, time to chill, kill

Snow falls in April
It's always winter somewhere in Colorado

A young black man pushes an old white woman in a wheelchair
People get their shoes shined, I've never owned shoes that needed to be shined

I dream of the woman I've been loving lately

The most fascinating sight of all
A kids basketball team in wheelchairs
One kid has only one full arm, no legs
They are smiling tossing two basketballs between the eight of them
They are smiling more than any of the other travellers I've seen
So much of life is perspective

The next plane is here
I'll sleep terribly tonight
I hate sleeping in airports
But the sweet reward: climbing tomorrow in a Mexican limestone paradise
Then on Saturday a wedding of two people who love one another,
and friends who love one another, and more new friends to meet
The pie in the sky leads somewhere...
Posted by Luke Mehall at 6:51 PM 1 comment:

My Book is Now a Real Book!

Last night I got the final proof of my book, Climbing Out of Bed, and it is now available in print! So stoked about this! It's been available as an e-book for awhile, but its much more meaningful to have it available as a real book.

Here's the link for the book in print, and I'll be doing a small book tour in Colorado this late May, starting with Maria's Bookshop in Durango on Tuesday, May 21st and The Firebrand in Gunnison on Thursday, May 23rd. More dates to be announced. 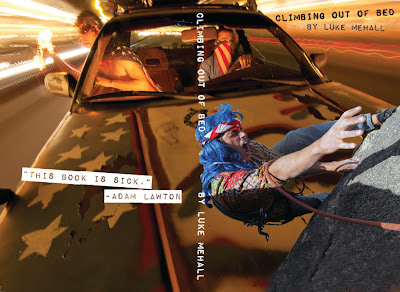 Thanks for the support everyone!

peace,
Luke
Posted by Luke Mehall at 6:52 PM No comments: