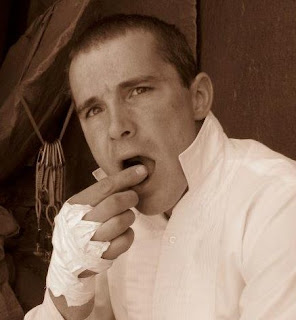 Since this one is about love (or at least the search for it) I wanted to say how genuinely happy I am that everyone in the United States is now able to marry whomever they love. I’ve always appreciated that lyric from the song "What the World Needs Now is Love" by ’70s diva Dionne Warwick: “We don’t need another mountain, there are mountains and hillsides enough to climb ... What the world needs now, is love, sweet love.”

In a world where homosexual people are discriminated against, I know the journey is not over. But it’s a big step in the right direction. In a day and age where there seems to be a tragedy nearly every day, it’s good to get some uplifting news that will lead to positive social change.

Love is a hard thing to find, and to find a person you want to spend the rest of your life with, that’s even harder. As a single guy who is 36, I can attest to that. But, as I’m approaching 40 and have a little more salt and pepper in my hair, I’ve got an advantage: I’m entering my Clooney years, baby!

The only problem is, I don’t look anything like George Clooney. I only have a dash of salt, and I don’t have the hair. I always rock a buzz cut, which makes me look more like a college bro than a mature heartthrob.

And, believe it or not, this buzz cut led to one of the longest relationships I've ever had with a woman. Take the 14-month period when I dated three women consecutively, all with the same name.
To protect the innocent, let's say the name was Lynn. The first Lynn was a sweet city girl, who had just started climbing. We met in said city and dated for a little while. But we realized during a weekend winter getaway in Moab that the magic just wasn’t there. We talked about it and ended our brief little fling, no hard feelings.

Shortly after, I got a haircut. Let me preface that by saying I’m not picky about who cuts my hair or where it's cut  – just as long as it's done right and it's done cheaply. So, I had been going to this place that cuts hair for cheap, and the same woman cut my hair every time. I’ve always found this to be a very interesting relationship. In what other close setting with a stranger is small talk so important? At the dentist, they are all up in your grill. At the doctor, you are so uncomfortable sitting on that white paper that you don’t really want to talk. But at the hairdresser, small talk defines the experience.

Now this woman seemed to be one of those people that had given up on her dreams. She had kids when she was young; and maybe she didn’t even have dreams. I just got the feeling she was disappointed by life. So I think once she found out I was an outdoorsperson who travelled all over, she started vicariously living through my trips. That formed a bond and eventually, she started asking about my love life. Like, do you have a girlfriend?

I told her yes, but by the next haircut, I had found another girlfriend, the second Lynn. I told my hairdresser about No. 2 while she carefully buzzed my head, which I appreciated. I mean, when you’re getting your hair cut at the cheapest place in town, some people are downright rough with the buzz cut. I’ve walked out of some cuts apologizing to my head.

So, she’s gently buzzing my head, #2 clippers style, and I’m telling her about this woman I’m falling for, “Oh yeah, she’s a climber and a writer just like me.”

“Wow, that’s incredible,” the hairdresser says, “to find someone with such similar interests."

As you can probably predict, things didn’t work out with the second Lynn. We broke up, and it was a sad breakup. I was three weeks out and went to get a haircut. One of the worst parts of a breakup is constantly having to tell everyone you’ve broken up. So by now, I’m over it. Of course my hairdresser is going through her repertoire of topics and inevitably comes to, “How is your girlfriend, Lynn?”

A few months later, and what do you know? I start chatting with a beautiful woman I’d seen around town and finally get around to formal introductions. When she tells me her name is Lynn, my head spins. Whatever the universe is telling me, I should probably listen. Maybe this is The One?

You see where this is going. And, I’m not proud of it, but traits from the second Lynn and the third Lynn were blended together for the hairdresser into a potpourri of a woman. “Wow, she’s a climber and a skier and a runner. And, she’s a writer and a teacher and a scientist, you better hold onto this one.”

At this point, the third Lynn and I were on about our fifth or sixth date. We had plans to hit up the hot springs that night, when she suggests a change in venue: West African dance lessons.

Not wanting to seem boring, I agree. “Just so you know, it’s mostly women,” she cautions. “But I think you’ll have a good time.”

"Mostly women" turns into myself, one other hippie guy who I’m pretty sure is there to meet hippy chicks, and 50 other women! And the dancing is sexual, heavily involving booty shaking and hip thrusting. The instructor, who is visiting from West Africa, is a short little, joyous man, and I realize just how culturally different West African and Colorado are.

So I’m trying to hang tough and not get trampled by 50 women as we go through a conga line. Talk about out of your comfort zone. After the date I couldn’t wait to get out of there. “I can’t believe you stayed,” Lynn No. 3 said.

Needless to say, it didn’t work out with the third Lynn. And when the time came around for my hair to get a trim, I prepared to tell the hairdresser the news that I’d broken up with two women I’d melded into one. But, she was gone. She quit the gig, and I don’t know where she went. And my next haircut felt like I was in a headlock being poked by aliens in the head. It was by some woman named Marge, who very much frightened me.

I longed for my old hairdresser and to this day, wonder what became of her. I can only hope that, after months of chasing someone else's dreams, she finally decided to follow her own.
Posted by Luke Mehall at 10:43 PM 1 comment: