The Black Canyon, according to Duane Vandenbusche 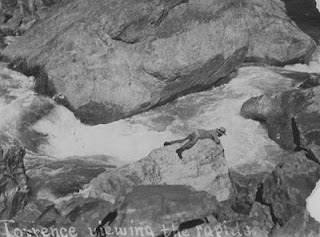 The Black Canyon National Park, just a few minutes from Montrose, is one of the most dramatic canyons in the country, offering visitors a chance to look 2,000 feet down to the Gunnison River that flows below. For those curious about the history of the canyon, look no further that the pages of “The Black Canyon of the Gunnison” by Duane Vandenbusche.

Vandenbusche, a professor of history at Western State College of Colorado (WSC) in Gunnison, knows the canyon inside and out. He’s been exploring the Black Canyon since he arrived to the region in 1962, before the Blue Mesa reservoir and dams within the canyon. His greatest adventure was being a member of the team that made the first successful voyage through the canyon, from the town of Cimarron to its end.

“It was a four-day adventure and I lost 10 pounds,” Vandenbusche says. “The depths of the canyon kept us on edge the whole time. It’s a daunting place, some days we only had 30 minutes of sunshine because of the steep canyon walls.”

The steepness and narrowness of the canyon Vandenbusche says is unrivaled. “The Gunnison River in the Black Canyon falls six times more than the Colorado River in the Grand Canyon.”

In the book other groundbreaking adventures in the canyon are documented, most notably the famous 1901 William Torrence/Abraham Fellows expedition that lasted 10 days. Fellows had an engineering degree from Yale and Torrence was a native of Montrose who was familiar with the canyon. The expedition was done for the U.S. Geological Survey to find a site to divert water to the nearby and arid Uncompahgre Valley.

In the book, Vandenbusche writes that Torrence and Fellows “crossed the Gunnison River 76 times with no knowledge of what lay before them….climbing, swimming in roaring and cold water.”

The expedition discovered a place for the Gunnison Tunnel, which today still provides water for Uncompahgre Valley and its citizens. It was the first U.S. Reclamation project in history and last year the tunnel celebrated its 100th anniversary.

Another major feature that carries historical significance is the former Denver and Rio Grande railroad that ran through the canyon. The railroad ultimately failed and was plagued by the natural features of the canyon, including falling rocks.

“The Black Canyon of the Gunnison” also covers the excellent fishing of the canyon, rock and ice climbing, ice skating and kayaking. Towns that were buried into history by the Blue Mesa Reservoir also are included.

“The Black Canyon of the Gunnison” is published by Arcadia Publishing, based out of San Francisco, California. It is available at local bookstores and also at the South Rim Visitors Center in the Black Canyon National Park.
Posted by Luke Mehall at 3:04 PM No comments: