Alexandria Bombach travelled to Kabul, Afghanistan last year, and says she’s never experienced more hospitality. Bombach, a 27 year-old filmmaker and former Durango resident, went to Afghanistan in search of stories to tell, and came back with a gem: the blossoming, and endangered art of photography in the war torn country.
Now she’s trying to return to the country, with a Kickstarter campaign to fund, “Frame by Frame” her first feature film project, with another adventurous female cinematographer Mo Scarpelli.

Bombach credits her time in Durango for her sense of adventure, and career in film. A 2008 graduate of Fort Lewis College, she started making videos late in her collegiate career and worked as an intern at Osprey Packs, over in Cortez, where she was introduced to the outdoor industry. Shortly after she founded the production company Red Reel films, which will produce “Frame by Frame”. In 2011 Bombach hit the road with her popular short film “23 Feet”, about people who live simply in order to follow their outdoor pursuits. She’s been on the road ever since.

“After I left Durango I was never in the same place for more than three days that year,” Bombach says. “I lived out of an Airstream trailer for a while, and now I just live out of my suitcase.”

While working on a series of short films about movers and shakers of social and environmental change called MoveShake, she came across some rough footage of the streets of Kabul. A light bulb went off: she wanted to make a film in Afghanistan. “We as (civilian) Americans only see the perception of the country through one media lens,” she explains. “Mo Scarpelli and I wanted to go down there and make a character driven film.”

Although she was nervous and didn’t know what she would find Bombach booked a flight to Afghanistan and found her characters within the community of photojournalists. Photography was banned in the country from 1996 to 2001, while Afghanistan was under the rule of the Taliban. Now, it is everywhere in Kabul. However with the planned troop withdrawal at the end of 2014, accompanied with inevitable withdrawal of the international media, it is uncertain what will happen, and if the Taliban might regain control of the country and the media.

“The situation in Afghanistan changes everyday,” Bombach says. “A lot of Afghans say it’s going to be fine after 2014, but there’s also been a huge reliance on the Western media for jobs. People that help the Western media are seen as possible targets for the Taliban. No one really knows what is going to happen.”

The uncertainty is all part of the process, according to Bombach. “We knew we would focus on a character driven film, and we knew we wanted to tell a human story, not a media driven story.”

In “Frame by Frame” they are focusing on four Afghan photographers, among them Najibullah Musater, a man in his fifties, who illegally shot photography while the Taliban was still in power. “He is this person who is just like our Dad, a great wonderful human being.”

Other characters include Farzana Wahidy, one of the only female Afghan photojournalists, and Massoud Hossaini, a Pulitzer Prize winner.

While filming in Kabul and the surrounding areas Bombach dressed in the traditional clothing of the region: wearing a scarf over her head, and a long dress. She described the area as wonderful, with a strong sense of hospitality. “Everywhere we went people were inviting us in for a cup of tea,” she shares.

Still, she felt the reality of violence that is still prevalent in Afghanistan. While shooting footage in a mosque in Kabul during Eid (their holiday similar to our Christmas) a suicide bomber attacked another mosque in the country where 40 people died. “That was an eye opener, it was only the second day we were there,” Bombach shares. “But with filmmaking I have to keep my eyes on the prize. There’s a quote from journalist, Sebastian Junger, ‘the only time you are afraid is when you don’t have something to do,’ that holds true for me.”

After returning to the United States, Bombach and Scarpelli realized they needed more footage to give “Frame by Frame” justice. They turned to Kickstarter, a fundraising website, that offers various rewards to backers, based on the donations they make to the project. Contributions can be as little as one dollar. They set a goal of $40,000, which must be met by Thursday, August 29th. The outpouring of support has been more than encouraging so far.

“It takes a community to make a film,” she says. “Kickstarter is great to reach that community, and interact. In addition to donations we’ve had people contact us to provide music and other services.”

If all goes as planned Bombach and Scarpelli will travel back to Afghanistan for five weeks later this year. “The support from Kickstarter will allow us to get back there and film,” Bombach explains. “All the money will go to production costs, it’s a really expensive place to film.”

While the story evolves and changes, Bombach’s goal remains the same. “If this film changes one person’s mind for the better about Afghanistan, then it will be all worth it.”

To watch the trailer for “Frame by Frame” and support the Kickstarter campaign visit: www.framebyframethefilm.com.

This story appears in today's Durango Telegraph.
Posted by Luke Mehall at 7:57 AM No comments:

Just The Four of Us, The Bromance

Romance is an essential part of life, the story of the world revolves around it, and many great men have fallen to their knees for a beautiful woman, and vice versa. Love makes us strong and it makes us weak. Thus, there are thousands of novels about it, and even an entire genre, The Romance Novel. I want to take it one step further, and introduce The Bromance Novel. 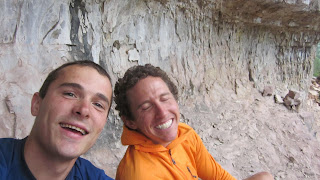 As I’m writing this, the computer program is underlining bromance, not recognizing the term. Silly computer. It’s okay though Microsoft Word, bromance is a relatively new concept, and I forgive you.

Bromances are beautiful because you can have many of them at the same time. No one is going to get jealous. You could start a bromance on the trail, at the bar, or even on the street. It’s a connection thing: the recognition that you are a dude and so am I, as pure as the kid looking for someone to play with in the neighborhood. We men are simple creatures, and unlike a romance, your potential partner in bromance isn’t likely to analyze you to no end upon meeting. He just wants a buddy, and you can never have too many buddies.

A couple weeks ago, fresh off of a breakup with my last girlfriend, I was in need of some serious bro time. Fortunately, three of my best buds were in need of the same. It was Tim’s birthday, and a Sunday, which is the day we try to set aside to go running for our unofficial and nonexclusive Sunday Running Club. An unusual morning rainstorm was ensuing, but instead of bailing we rallied and headed up to the mountains.

We packed up my Subaru and drove towards Engineer Mountain, our objective for the day. Tim was turning 37, and he wanted to commemorate the day with athletic feats, plus a multitude of high-fives, which I’ll get into here shortly. Long gone are the days of binge drinking to celebrate birthdays, we prefer endorphins.

I swear my car already started to smell the minute four dudes packed into it. We’d yet to break a sweat, but somehow an air of dude overcame the entire confines of the Subaru. On the drive up, we chat about our relationships, and offer advice. Most are on the prowl, while I’m reeling from a breakup. My homies hear me out, and I appreciate them for that. The bromance meter is ticking up.

The rain continues to pour. We could bail, but the bromance level would dip down, so we throw on some rain jackets, strap up our running shoes, put our man pants on and start jogging up.

The rain alternates between drizzle and downpour, yet we march on. We speak in the language of bromance: shouting, laughing and farting. An hour into the run and we are close to the summit. Two weeks ago we were shut down by bad weather, and it happens again. It was not our day for the Mighty Engineer Mountain. Jonathan has summit fever but we talk some sense into him. “It’s not a time for heroics up here buddy,” Al says, persuading him to go down by sweet-talking him into getting some grub at our favorite breakfast joint.

Back in my car we are muddy and sweaty, and the stench of my car already equals a weeklong road trip. Ewwww…downfalls of the bromance. We beeline it straight to breakfast, and get our name in for the expected twenty minute wait. While loitering in the parking lot, we decide to do pushups. Tim cranks out 37, and then high-fives us. Only 34 more high-fives to go.

We take a siesta at Jonathan’s, watching the latest climbing movies, cultivating some man-crushes. “Alex Honnold, so hot right now,” Al says. Honnold is the star of the climbing world right now. He climbs stuff without a rope that we can’t even do with a rope. His National Geographic cover shot, and an appearance on “60 Minutes” has solidified a level of stardom that no rock climber before him has attained. We also watch a film about Himalayan alpine climbing, where they smoke cigarettes at night in a portaledge (a hanging tent used for climbing) to curb their hunger. Bromance taken too far, if you ask me. We encourage Tim as he cranks out 37 pull-ups and 37 sit-ups.

It was time to complete the high-five challenge. Off to City Market, and we spread the stoke of bromance. Tim approaches strangers for high-fives, and every single one smiles and obliges. What a town! With his 37th high-five of the day the mission is complete. What do we do now? Go rock climbing of course. The rain has subsided and there’s nothing more bromantical than a multi-sport day.

After dangling on overhanging limestone during a slight drizzle, we are spent, and retire downtown for dinner. Tim’s birthday challenge is complete, and Jonathan says he feels like he just had a weekend getaway in his own town. The beauty of Durango baby!

We all go our respective ways, you can’t take the bromance home with you, but you can take home the memories. Socks, shoes, and all sort of disgusting remains get left in my car, and I spend a week airing it out and trying to find the proper owners of said filth.

There are downfalls of the bromance for sure, which reminds me that these days of bromantical bliss won’t last forever. I’ll find romance again, which will take time away from these sweet nothings of bromance. And, maybe someday when I’m older, hopefully as a writer-househusband who takes care of the cat, dog and houseplants, I’ll record more of these moments into a best selling bromance novel.
Posted by Luke Mehall at 9:53 AM 1 comment: