It's about that time to officially announce that my second book, The Great American Dirtbags is printed and a real thing instead of this vision inside my mind. I'm writing this at exactly midnight, Wednesday night, April 24th, because I want to go live in the morning. I'm no night writer, not the Hunter S. Thompson type, and I don't want to turn into one. But deadlines are deadlines, even if they are your own, which are usually the easiest to procrastinate.

This book, which I am proud of, is a collection of eighteen stories and a couple poems, and the pieces range from my depressed teenage years to my current happy mid-thirty-something "born again dirtbag" days.

As a self published author you learn to hate your words, and love them again. You spend so much time editing and revising them they take on a life of their own. The only real thing that truly keeps me going are my friends, my community, the climbing and greater outdoors community. It's a crazy realization to have, but all I ever need in life is under the sun and stars. Sure, there are times to have a roof over your head, to shower, to write, to make love, to eat, to rest, but in the end I would not want to live a life without adventures in the outdoors.

So many people have supported this project, and I promise to pay it back in karma points, but maybe that's not how this whole thing works. Some people just send their time and energy and love without asking for anything return, and that's the greatest lesson I've learned through this process. And now there is this book of dirtbag stories, for you, because they happened to me, but the stories themselves are nothing without someone reading them, then they take on a life of their own, they are yours.

This spring and summer I will be traveling across the United States and Canada on a book tour supporting The Great American Dirtbags. The tour kicks off on Tuesday, April 29th at Maria’s Bookshop at 6:30 p.m., followed by the first ever “Climber’s Beer Night” at Carver’s immediately following. There will be a haiku contest, a ticketed giveaway and beer specials. On Thursday May 15th, I'll be at the Black Diamond Store in Salt Lake City, Utah, with Stacy Bare.

The Great American Dirtbags was published by Benighted Publications, and retails at $13.99.
For media review copies please contact me directly at luke@climbingzine.com. word!
Posted by Luke Mehall at 10:14 PM No comments:

Calling A Bromoratorium Or Romance In Durango 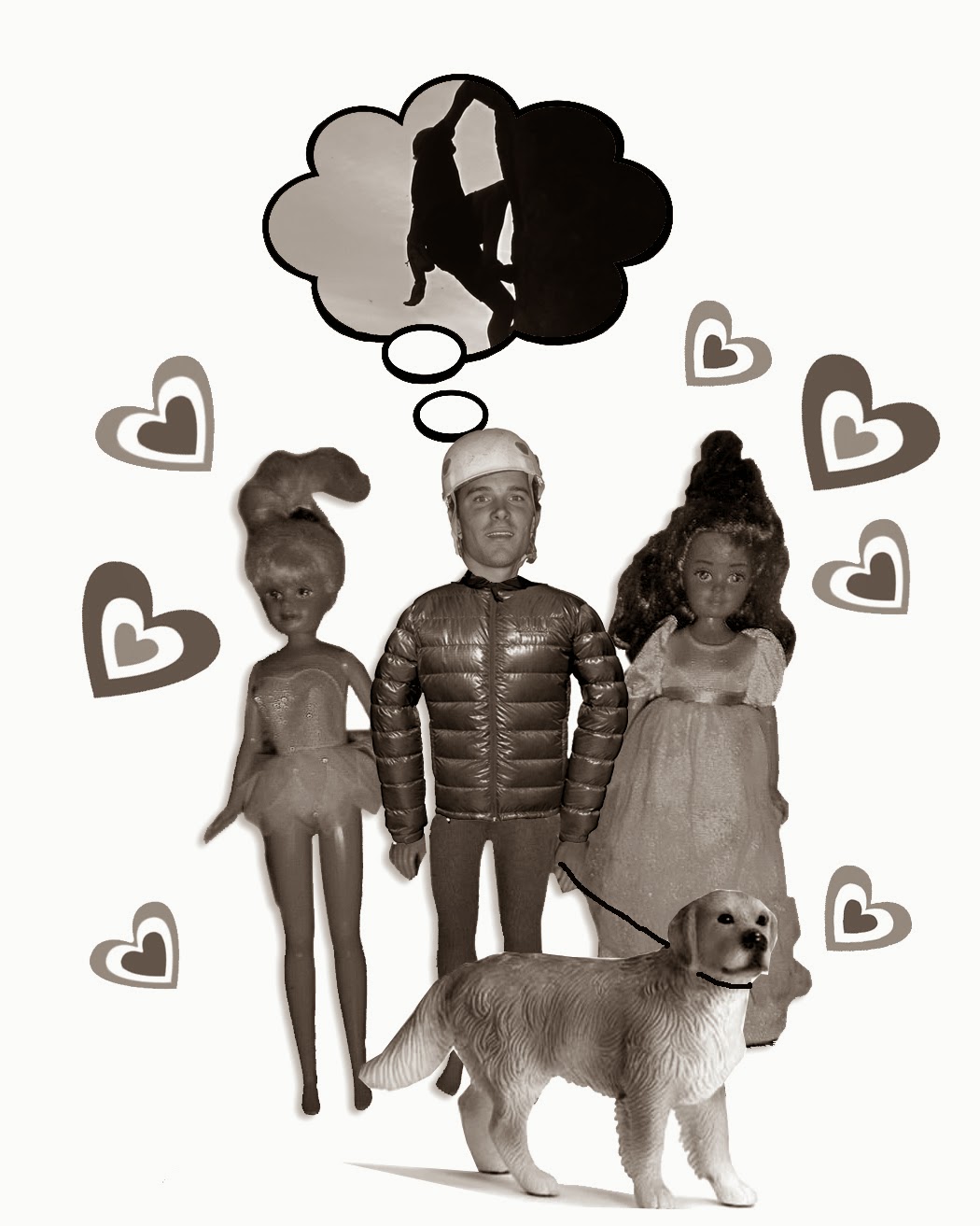 “Life’s not a bitch. Life is a beautiful woman.”

That is my favorite line from an abstract rapper, Aesop Rock, and it’s also how I feel about life and the opposite sex. Life is a beautiful struggle, and love with a stunning woman makes it all worth it.

Several weeks ago I wrote an article for The Telegraph about dating in Durango. In the style of journalism, I reported just the facts, based on what I got out of interviewing single people in Durango, while also additionally including some more informal thoughts from conversations with various single friends. Personally, I found it interesting that there are seemingly an abundance of single women in Durango, for a mountain town anyways, and many of these women complained about this “Peter Pan syndrome”: men who are never going to grow up, and are more concerned with skiing and beer than a relationship.

For starters, I’m calling bullshit with this whole “Peter Pan syndrome” thing. Not that many men, including myself, spend as much time as possible recreating in the outdoors, and are able to hold onto a youth like energy and enthusiasm for life, but that this somehow trumps the need for a relationship. I mean, we have our bromances, but bromance alone is just not enough to live upon.

That is why recently I called a moratorium on my bromances. It was getting to be too much. I realized this on Valentine’s Day. It was just me and one of my best bros alone out at Indian Creek. The weather was perfect. There was peace and solitude in abundance. The moonrise over a quiet camp put me over the edge, “This is too bromantical,” I said. It was Valentine’s Day and there I was, in the perfect situation for romance, but I was with my bro. And, thus the bromoratorium began. No more bromances until I experience some real romance.

By all accounts of my Midwestern upbringing I should be married and have three to twelve children, with a boring 9-5, a minivan and a mortgage. I rarely think much of being 35 and single until I go back to the Midwest and people are getting married in their early twenties and then poppin’ out babies a couple years after getting hitched. But I guess I went another way, some people’s paths to finding a partner take longer than others.

My friend Matt, a good looking lawyer if I say so myself (oh, wait I said I was done with the bromances) has this theory: once you decide that you’re done with the floozies, and want to be in a committed relationship with a life partner, you’ve got to give yourself around five years to find that person.

Just recently I’ve truly arrived at the place Matt described. Looking for that special someone, that one in a million, not that one that is over there at the bar. Reflecting over my Peter Pan qualities more than one got away. And then there was The One, but she moved to the east coast, and I chose the mountains of the west over our love.

For years I lived in the Gunnison-Crested Butte region, where the dating scene can be tricky. My friend Nicole, a Gunnison local, told me, “You have to pounce here, if there’s a new girl in town you have to swoop her up before someone else does”. So I tried pouncing, and you know what she was right, it works, but pouncing is not exactly a natural way to start a relationship.

Compared to the pouncing of the Gunnison Valley, Durango seems chill. It also seems like New York City compared to Gunny. There’s much more women here, and not just that there are women who are really looking. So you have to play defense a little more. When I had a close friend, who is quite charming I must say (who am I kidding I’m addicted to bromance), moved here I warned him. He thought I was joking until he lived here for a few months and several women were going after him. Luckily, he practiced some self-restraint and didn’t turn into a man whore.
And I’ll admit I had a brief phase where I went after every woman who came my way when I first moved here. But I found often dating is like interviewing for a job you don’t even want. After three years of this in Durango I haven’t found The One, but there is The One I Avoid At The Grocery Store. So now I’m a little more laid back and selective, waiting for that perfect blip on the radar. It’s a nice place to be.

To me love is like cheese, or beer, or anything that is incredible and you can’t really explain it you just know you want it. Dating gets trickier and there’s less of a pool the older you get. At 35, the women in their younger twenties are out of the question, which kinda makes me feel old. Now, I look at a women’s face and see those crows feet as sign of beauty, the lines of experience that shows she’s been through similar trials and tribulations of life and love that I have. I’m okay with some baggage; it must fit in the overhead container, but the reality is when you’ve reached your mid thirties you’ve been through some stuff. The longer we live the more stories and experiences we collect.

In my prime, I often fantasize about one last wild phase of my life, move to New York City for a year, get crazy, date all sorts of women, but then I stop and think that there are probably more women in Durango I’d want to date than there are there. In all of my travels there’s nothing more attractive than the Colorado Mountain Woman, the one who works hard all week, frolics in the mountains when she can, and you hold her in your arms when the day is done.

And why are we so hung up on this Peter Pan thing? That kid’s going to grow up and see what he’s missing out on. Even if many of us Durango dudes let our inner Peter Pan’s run wild most of the time, there’s a man inside who’s going to get his way sooner or later.

This piece is published in this week's Durango Telegraph.

My two books are called: The Great American Dirtbags and Climbing Out of Bed. Click on the titles to view them on Amazon.
Posted by Luke Mehall at 9:08 AM No comments: