The other week when the fall colors were poppin and the leaf peepers were a peepin, I drove over up to Telluride, and then up to Gunnison. I had a book tour event in T-ride and then a wedding in Gunnison. As I witnessed the amazement of the changing of seasons and the colors that accompany it, I was startled by something else as well, the amount of Trump-Pence signs off the side of the road.

My urge when I see those signs reminds me of my teenager anger, I wanted to throw eggs at them, or spit on them, or tear them down. And, I would, but, well, I’m an adult. The pen ain’t mightier than the sword, but I can still remind each and every Trump supporter that you are un-American, and you are a disgrace to our country.

It’s time to go somewhere else if you think that he is a proper leader for the most powerful nation in the world. You are a sucker and a damn fool if you think that man is a decent human being. Hilary Clinton isn’t perfect, but she is exponentially more qualified than a man who (among other things) taunts and insults the parents of a dead U.S. solider.

This whole piece could be a rant against Trump supporters, but I’m fairly certain most of you don’t read above the second grade level, so why bother. (Please prove me wrong and write an intelligent letter to the editor of why he is a qualified candidate.) I want to riff on something else as well, someone that Trump has clearly paved the way for: Kanye West. 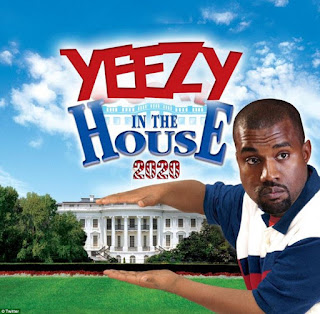 Last year at the MTV Video Music Awards, Kanye aka Yeezy, announced that he was going to run for president in 2020. Of course, everyone kinda viewed that as a joke, even Obama himself made fun of him, but now that Trump has risen to power, we have to look at Yeezy a little differently. I mean think about it: two men with insanely large egos, who say the most outlandish things just to get reactions out of people, and in turn get a ton of publicity for it. They both say they are geniuses. The difference is that Kanye actually is a genius, a musical genius that is.

Of course, Kanye would have to be a Democrat. You can’t be hip-hop and Republican. You just can’t. We believe Obama when he says he has Jay Z on his iPod. If Bush had said that we never would have believed him. (Side note, even Bernie Sanders has a little hip-hop in him, and teamed up with rapper Killer Mike during his campaign.)

Oh, but maybe this is the problem here. Republicans aren’t adapting and changing with the times. Please don’t think this is a rant against all Republicans, I know some of you are good and moral people, and right now with this presidential race, I feel sorry for you. Perhaps the good and moral Republicans are simply not in the majority anymore. The racist, ignorant, misogynistic, hate mongers seem to be in charge these days.

I know Hilary Clinton is favored to win this race, and you can be damn sure she’s getting my vote, but let’s say something happens, and the Russians hack our voting system and god forbid, Donald Trump is our next president. This sets the stage for a battle. Trump versus Yeezy.

And maybe in 2020 if our country still even exists, and Trump didn’t get impeached for doing something highly illegal, we will change the presidential debates into rap battles. (Trump’s style is more suited towards a rap battle than a presidential debate anyways.) Note: if you don’t know what a rap battle is get on YouTube and come back to this article. Or, watch 8 Mile with Eminem.

Basically in a rap battle practically nothing is off-limits. You can diss the opponent’s mother, their wife, their offspring, anything. It would be PERFECT for him. It’s just his style.

They would argue whose penis is bigger. They would argue whose wife is hotter. They might even mention killing their opponents. The sad reality is that in his own way Trump has already done all of these things. Trump is more suited for a rap battle than the presidency, and so is Kanye. But I bet Kanye would tear Trump a new one if they battled, just like Eminem did to his opponents in 8 Mile.

At this point in the conversation a lot of folks are bringing up the third party vote, especially the die hard Bernie folks. They don’t like Hilary and they don’t trust her. I’m not going to try to sway anyone from voting from who they think should be the president, after all this is a free(ish) country. But, you know what, Bernie wants you to vote for Hilary, so does Obama. As a country we need to ensure Obama’s legacy, we are in much better of a place now than when George W. left office.

Most importantly we need a leader who embraces the diversity of the United States, and knows how to operate within the world of foreign policy. Building a wall is not a solution. The position of commander in chief is a job, not a reality television show. There is only one person who is qualified. In the words of the Atlantic, who recently made their third endorsement for president in their 159 year history, “Trump is not a man of ideas. He is a demagogue, a xenophobe, a sexist, a know-nothing, and a liar. He is spectacularly unfit for office, and voters—the statesmen and thinkers of the ballot box—should act in defense of American democracy and elect his opponent.”

This article is published in today's Durango Telegraph.
Posted by Luke Mehall at 12:03 PM No comments: