This is my latest column for the Durango Telegraph's La Vida Local. While alot of folks have powder on the brain this time of year, the winter is the time when I slow down and get alot of reading and writing done. Anywho, here's Coffeeshop Reflections: 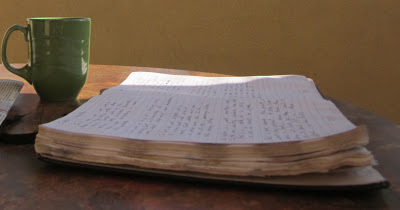 My favorite coffee shop in Durango is my second office, all part of a goal to put in 10,000 hours towards the writing craft. When I left behind the 9-5 world in my pursuit to become a self employed writer, I heavily considered two options: earning a graduate degree in creative writing, or simply writing creatively a lot. With the state of the economy and my unwillingness to go into debt the latter option won.

The coffeeshop portion of my writing day is always preceded by working from home. I am a writer that relies on routine. On an average morning I’ll drink three cups of murderous coffee, check Facebook 12 times, and ideally write 1,000 words. I work best when I’m working on several writing projects at the same time, coupled with a deadline. The words always pour out when they really have to.

These days I’m working on my second book, and the progress has been frustratingly slow. I don’t have a deadline, an agent, or a publisher. All I have is a vision. At the moment I live alone, and fighting with an idea in my mind, all by my lonesome, yielding little results, makes me question this pursuit to rely on my words to eat.

A lesson I learned from an artist friend of mine a long time ago always kicks in at these moments: when your art is not flowing it is time to recreate. So when I’ve reached that point of sheer lunacy because the vision from my mind won’t reach the computer screen, I typically get out my running shoes, and head out for a trail. After that I head into town.

Two years ago when first I moved here I was a stranger walking the streets of downtown. I was reveling in my new life, basking in the freshness of new faces, and just taking it all in. I settled into a routine, and started frequenting the same coffeeshop most afternoons, where I would sink into the ink of reading and writing. Since I didn’t know anyone I would rarely get distracted, and that was one of my most productive periods of writing I’ve ever had.

It was also winter, my favorite time to just simply be. I believe I’ve confessed in this column previously that I don’t drop my knees to the altar of skiing (I am happy to see it snowing out of my writing window at the moment though) so I am not possessed by that pursuit. This is good because I am obsessed with rock climbing for most of the year.

That winter I vividly recall reading Love in the Time of Cholera, an epic novel by Gabriel Garcia-Marquez. That body of work had everything in a novel that I was looking for, and I was entranced by the love story told within its pages. It was the kind of story that made me want to be a writer in the first place, that someday I could hope to produce words that would put a reader in a similar meditational trance. At the same time, and probably at least partially induced by Garcia-Marquez’s words, I had a crush on the barista who seemed overly friendly when I ordered my daily cup of tea. My imagination ran wild as I read the love story, and when I finished the book I finally got up the nerve to ask her out. I got her number and asked for a date, but she never called back. Oh well, finding love is almost like finding a good book; both are elusive, but if you stay positive and keep looking you’ll find it sooner or later.

The changing of seasons always changes my coffeeshop habits. While I do revel in the calmness of winter, spring’s flavors are irresistible. Often, when the weather is warm, I’ll find my attention span shorter, sometimes floating to two or three locations in a single day.

One fine day this past spring, I was shopping for a wedding gift for my brother and his soon bride to be. I ended up at a local bookstore where I bought a journal. The intention was that they could write in it during their upcoming honeymoon in Southeast Asia. After that I headed over to a coffeeshop that I’d never been to, which had an outdoor patio. I sat down, and struck up a conversation with a woman I’d seen around town, but never talked to. It turned out she was a writer herself, and we had this immediate connection, as if perhaps we’d known each other before, maybe in another life. I read her the note I wrote to my brother and his wife in the journal, which began an instant connection of words that we share to this day. She’s now one of my most reliable editors, and helped me shape my first book together for publication. Together we are starting another Durango-related writing project, tentatively called The Durango Dream Zine.

After two years of living here and dwelling in coffeeshops I’m no longer a stranger. Anonymity has been traded for community. In my beloved coffeeshop world I don’t simply bury my head in literature, I have meetings and visit with friends. Still, on a cold wintery day, I’ll pull out my journal, sip a comforting cup of tea, and float off to a dreamy, Durango consciousness, and let some words write themselves. Or, I’ll melt into a good book, and take a journey without ever leaving the coffeeshop. And in these moments there is nowhere else in the world I’d rather be.
Posted by Luke Mehall at 10:06 PM

The Durangno Dream Zine; UHHHHHH! I dig that...stoking up for some of dat