Climbing Out of the Darkness Into the Light 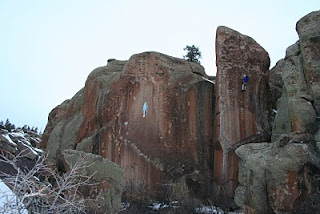 This article appears in the March issue of Colorado Central Magazine.

I woke up in Penitente Canyon freezing. It was Easter Sunday. This was back when my philosophy toward camping equipment was in its experimental stages; but I guess equipping for the great outdoors always is.

My philosophy was that two average sleeping bags would equal one good bag. The spring weather in the high country of Colorado proved to me quickly that I was wrong.

At our campsite, just a couple minutes from the climbing inside the canyon, I decided to get the stove going for some hot water. It sputtered and failed to light. I looked to my climbing partner and we immediately decided breakfast in La Garita, a few-minutes-drive away would be a good idea.

I was grumpy and in a sour mood from not sleeping but it quickly got better in the old sweet café in La Garita, the only breakfast joint in the small town.

Penitente Canyon has always lured me back time and time again. Over the years I’ve heard stories of the Penitentes, a branch of Catholicism that used to use the canyon for religious ceremonies. One of the ceremonies I’d heard about was on Easter Sunday they used to reenact the crucifixion of Jesus Christ, actually hanging a member of the sect to a cross then walking him through the canyon; suffering leading to salvation.

Driving back to the canyon, full of hot food and caffeinated I was excited, almost giddy; temperatures were getting better, the sky was that blue that it only is in the mountains, and we were about to climb, which in good conditions always makes me pleasant.

That day we spent doing what climbers do. Climbing up, coming down, being happy, yelling silly things, making inappropriate jokes, testing ourselves, falling, getting back on the wall, trying again. We did the classic climb next to the Virgin Guadalupe mural, (often mistaken to be the Virgin Mary). I thought and wondered if fifty years ago on the same day, Easter Sunday, how the Penitentes might be using the canyon, and what they would have thought if someone told them about the most popular use of the canyon, rock climbing, and how they would react.

Near the end of the day we tried one last climb, that time of the day when a climber knows the sun will be leaving the rock shortly, and it is time to savor those last few moments before the cold Colorado air kicks back in.

On my turn, I tied in, went up put the very tips of my fingers into pockets, later using those pockets for the centimeter of my climbing shoe that would fit in, as my fingers searched higher for more small holds. This particular climb was painful on my fingertips, but climbing is one of those sports where you have to endure some pain for success.

The climb ended, the light faded, we were full of adrenaline and we’d tried hard and it was time for beer. Salvation!

The climbing in Penitente Canyon is primarily short, when compared with other Colorado areas; climbs are usually thirty to sixty feet tall. It’s also easily accessible; a short five minute hike from parking leads one to the climbs. One of the greatest features of the canyon is that it is both very friendly to beginning climbers (numerous easy-moderate routes exist) and challenging to the best of the best.

In fact, perhaps the most famous female climber of all-time, Lynn Hill, was recently featured in Climbing Magazine, on a popular Penitente route, “Bullet the Blue Sky,” located just a few feet from the virgin mural. The climb is one of many that was established by Bob D’Antonio, a pioneer of the canyon who spent countless hours establishing routes. D’Antonio is also the author of the guidebook for the canyon, called, “Rock Climbing the San Luis Valley.”

The rock is volcanic and is featured with huecos, pockets and some cracks. The Sangre de Christo mountains stand proudly to the west towering above the San Luis Valley. The canyon has a spiritual feel to it. Hikers often stroll leisurely through the canyon to watch climbers. In the spring and fall climbers from all over Colorado, ranging from Denver to Durango enjoy the offerings of the canyon.

Penitente Canyon is located on Bureau of Land Management Land (BLM) property and is managed by the Saguache Field Office. Camping is available for a moderate fee and group sites are available.

Penitente is one of many climbing areas in Colorado that hold a special place in my heart. To me it’s shrouded in mystery of what the Penitentes actually did there. (I look forward to learning more in the pieces accompanied to this article.)

Most of all, it’s a place I remember for that Easter Sunday, when I woke up cold and miserable and left, tired and happy. A place in the great outdoors where one can come out of the darkness, into the light.
Posted by Luke Mehall at 11:44 AM

God I love that place. Here in TX we don't have BLM land, or any substantial free open space. Every time I've been there it's been hot as hell though.